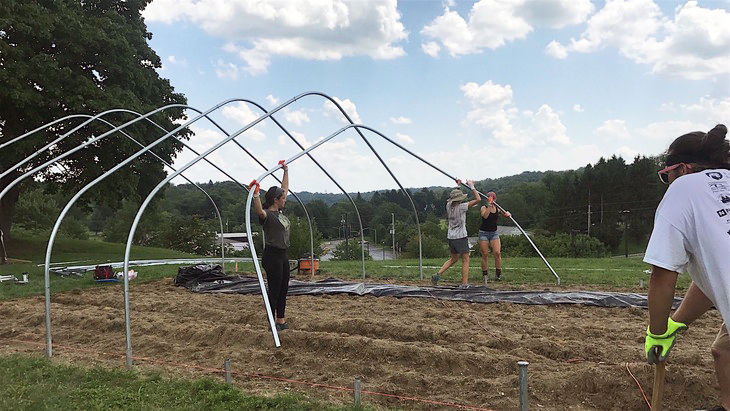 MONACA, Pa. — Angela Fishman plucked a cherry bomb tomato, fresh from the Student Farm at University Park, from a carton and popped it in her mouth.

“Cherries in season are so great,” said Fishman, an associate teaching professor at Penn State Beaver. “I’m anxious to see if we can get them to grow here in the winter.”

“Here” is the 96-foot-long high tunnel that a team of staff and students from the Beaver, Behrend and University Park campuses worked to raise in the grassy area behind Harmony Hall on Aug. 6. The tunnel, a long, greenhouse-like structure, will allow Fishman and her students to grow fresh produce on campus throughout the year.

But building the behemoth on a 90-degree day in full sunlight is not an easy feat. The sound of metal on metal echoed across campus as the sweat-covered team pounded stakes into the ground and fitted story-high frames into place.

“When we first started talking about a high tunnel, I didn’t think it was going to happen. It was just such a big project,” said Jill Loftus, a former Beaver student who now attends Penn State Behrend and is working as a student farm intern at Beaver this summer. “It’s really cool to see it actually happening.”

The high tunnel is one of several agriculture and food-related initiatives being implemented at Beaver with the help of a Penn State seed grant. To be eligible for the grant, projects must incorporate the University’s strategic plan and its thematic priorities, such as transforming education, enhancing health, and stewarding the planet’s resources.

University Park, Behrend and Beaver applied for and received the grant jointly. The idea was to prove that campuses of all sizes can provide, and benefit from, interdisciplinary learning opportunities around sustainable food and agriculture systems.

“Penn State is committed to engaged scholarship opportunities, and food systems is a topic that has applicability for everyone — we all eat,” said Leslie Pillen, the associate director of Farm and Food Systems at Penn State’s Sustainability Institute, who wrote the grant. “The question of equality in the food system is one that affects all campuses and all communities.”

Pillen was on hand to help raise the high tunnel and provide both advice and sustenance, in the form of fresh tomatoes, to workers and volunteers.

Pillen and her students constructed a high tunnel at University Park last year, but it was half as long as Beaver’s tunnel. The crops grown within have helped to supply a small portion of the fresh produce used in dining halls at University Park, something Pillen hopes will happen at Beaver, too.

“To me, it’s an exciting opportunity,” she said. “The Beaver campus is smaller and the tunnel is bigger, so there’s a chance to fulfill a significant quantity of the greens and other produce used on campus.”

Beaver is already growing vegetables and herbs in a smaller garden behind the Laboratory Classroom Building. A portion of that harvest is donated to the Salvation Army of Beaver Falls, the food assistance distribution point for Beaver County. More than 22,000 people in the county are considered food insecure, including more than 7,000 children.

The remainder of its yield supplies the campus’ community-supported agriculture, or CSA, a subscription service that allows consumers to buy a share of a harvest directly from the producer. Summer subscriptions were $105 for eight weeks and boxes were filled with in-season fruits, vegetables and herbs, including beets, kale, squash and radishes.

Fishman hopes the high tunnel will allow them to offer a fall and winter CSA, as well.

Of course, fresh produce isn’t the only upshot of a campus garden. Along the way, Beaver students and student interns have learned a few handy skills, like how to properly swing a sledgehammer and expertly change a drill bit, and gained an appreciation for farming and food systems.

“It’s really rewarding to see your own vegetables growing from the seeds that you planted,” Loftus said.