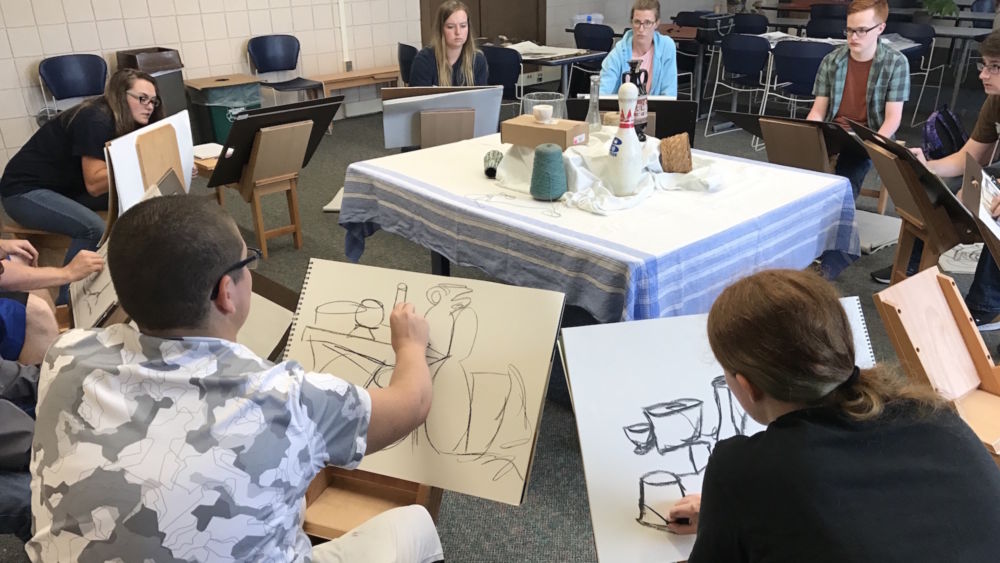 MONACA, Pa. — As the insistent clicks and whooshes of charcoal hitting paper fill the classroom, instructor Sarah McMahon pauses her pacing and sighs.

“I love that sound,” she says with a grin.

McMahon, a textile and two-dimensional artist, is teaching Penn State Beaver’s six-week drawing class this summer, and Academic Affairs Director Carey McDougall, herself a sculptor, couldn’t be more excited about the offering.

“Art classes, especially drawing, are really teaching you how to see,” McDougall said. “We all look all the time, but how often do we really see?”

That was the exact lesson McMahon was hoping to impart on a Wednesday afternoon in June, during the first week of class, as she led students through a series of exercises designed to loosen their bodies and keep their eyes on the objects they were drawing, not the drawings they were creating.

“Remember,” she said, “we’re looking up and letting our hand follow what our eyes are seeing.”

It sounds simple, but it can be a difficult task for students more accustomed to gazing at screens and scrawling copious notes. It helps that the library classroom where they’re gathered has been transformed; desks replaced by drawing horses, pens exchanged for charcoal sticks, and lecterns swapped out for a still life of vases and baskets.

But just because the tools are different doesn’t mean the class isn’t demanding, McDougall says. In fact, drawing classes don’t just test and stretch the limits of creativity. They’re physically taxing, too.

“When you’re drawing horses, you’re in active posture,” McDougall said. “Part of drawing, part of being an artist, is using your body.”

But for all the challenges that come with the class, there’s also liberation. Drawing, like handwriting, has lessons but not limits. It’s the kind of thing you make your own.

“I like the freedom of it,” said Elizabeth Cummings, a Pathway to Success: Summer Start, or PaSSS, student who will be a freshman in the fall.

McMahon hopes her students will find creativity and meaning in that freedom.

“Creativity is important no matter your career path,” McMahon said. “Creativity is the door to innovation and it’s a positive force in any environment.

“I want them to look hard at what’s in front of them, to become critical thinkers and to be open to the idea of art.”