September speaker series to focus on county’s economy and environment 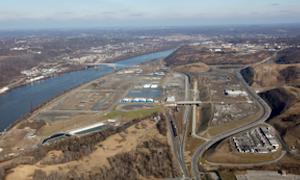 The Beaver County Economic and Environmental Speaker Series will focus on the construction of Shell's cracker plant, seen here, the closure of the Little Blue Run Coal Combustion Disposal Area and the impact of hydraulic fracturing.

MONACA, Pa. — When Shell Chemical announced its plans to build a multi-billion-dollar ethane cracker plant in Beaver County, the reaction from residents was swift and bipolar.

On one side were those thrilled by the prospect of jobs and a sure swell in the local economy. On the other side were those concerned with the environmental and health implications of converting ethylene into polyethylene pellets.

Penn State Beaver plans to explore both sides of the debate and much more in its three-part Beaver County Economic and Environmental Development Speaker Series.

The series, which runs for three weeks in September, is the brainchild of Michael Hay, associate professor of chemistry at the campus. The series begins with Shell, which has been the issue on the collective mind of the county, and continues with a look at other local industries, including hydraulic fracturing (or fracking) and coal ash waste collection.

All lectures begin at 12:15 p.m. in the Student Union Building Lodge and are open to the public.

Friday, Sept. 1
Jim Sewell from Shell Chemical Appalachia will give an overview of the environmental and regulatory aspects of the Potter Township cracker plant.

Friday, Sept. 15
Nestor Santos from Chevron will give a presentation on the economic and environmental impact of fracking.