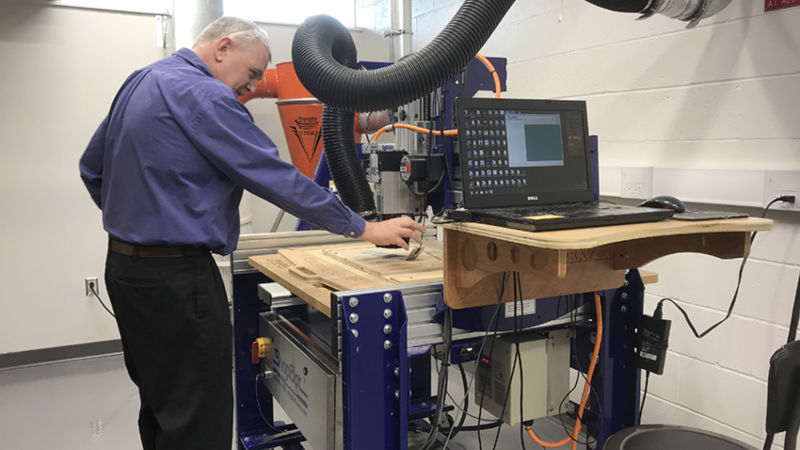 The maker space in the Michael Baker Building is giving engineering students access to high-tech machinery that is preparing them for their future education and careers.
By: Kristen Doerschner

But tucked away on the ground floor of the Michael Baker Building is a workshop that is preparing students at Penn State Beaver for the future.

Over the past several years maker spaces have begun to pop up everywhere in schools, libraries and community buildings. They are shared working spaces – sometimes involving high-tech tools and machinery and sometimes with low or no tech tools – that allow collaborative work to take place. In the case of high-tech maker spaces, it gives people access to expensive machinery they may otherwise not have access to.

The maker space at Penn State Beaver is high tech and divided into two sides: one for metal working and one for working with wood and plastic. The machine in the lab is a CNC Router, also called the ShopBot Buddy, which is a computer-controlled machine that cuts wood, plastic and metal.

The key is building a model you can machine, he said, to build something that can be digitally prototyped.

“I call it the great digital divide,” Hendrickson said. “You’ve got a neat idea, but you can’t do anything with it because you can’t generate the model. I think we’re good at this campus at getting students proficient in that area.”

Hovanec started at Penn State Beaver and still visits the campus. He said one of his professors at Behrend was talking with a senior student when the professor commented that people in senior design don’t really understand the process of creating a project from scratch and presenting it.

“Then he kind of took a step back and said, ‘Except for the Beaver engineers. They kind of know what’s up, and their projects are usually really good.’”

Hendrickson said the maker space has benefitted people beyond the engineering students.

Hendrickson said it’s crucial to master solid modeling to get to the stage where you can produce a perfect final product.

Everything is entered into a computer that runs the machine. “You shouldn’t get surprised by what you see,” Hendrickson said of what the machine produces.

Recently, Hendrickson made a wooden plaque for the Pennsylvania Society of Professional Engineers. It was presented to the society March 12 when they held their monthly meeting on the Penn State Beaver campus. A story about their meeting and the plaque presentation, along with an article by Burbage, is featured in the society’s latest newsletter.

Hendrickson said it required 25,000 lines of computer code to create the plaque. It took about 35 minutes to carve the medallions into the plaque using a small bit moving systemically and meticulously across the wood.

Hendrickson said grant funding and some support from the College of Engineering has made the maker space possible. He said Eaton Corp. has supported the maker space. 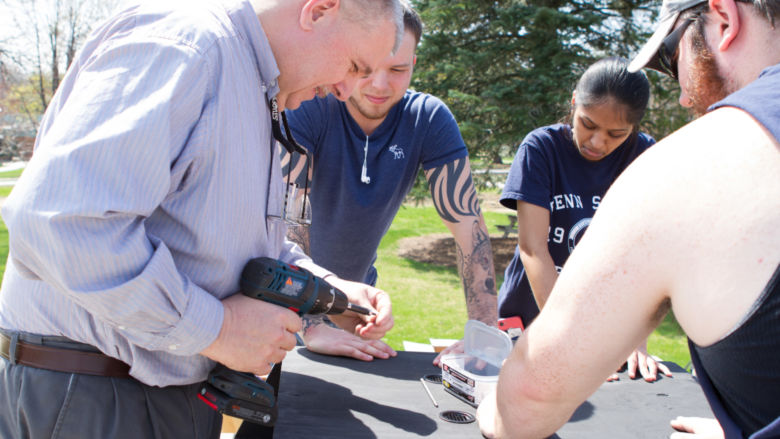