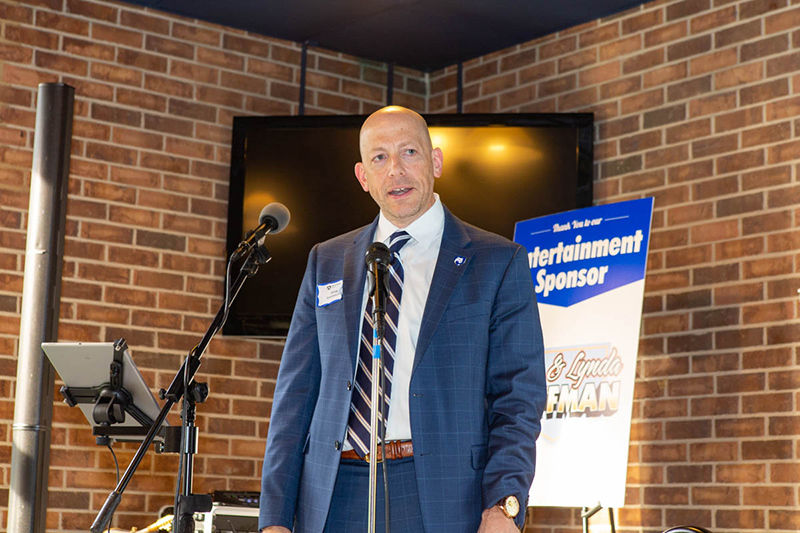 Greg Cerminara was named the Penn State Beaver Outstanding Alumni of the Year for 2020. He is pictured here at the 2019 Wine, Ale and Food event on campus.

It is often touted that Penn State has the largest alumni network in the country, but it’s the volunteer work of the local alumni that can make the most immediate impact for Penn State Beaver students.

Greg Cerminara, 1989 engineering, the 2020 Penn State Beaver Outstanding Alumni, has contributed to the campus community and worn many hats as a volunteer for years.

Cerminara joined the Penn State Beaver Advisory Board in 2010 and served as the vice president from 2012 to 2015. In 2015, he assumed the role of board president, and he currently serves as the immediate past president.

Cerminara, a senior manager with the civil engineering firm Gannett Flemming, was the facilities planning committee chair from September 2012 to May 2015. He also is one of the founding members of the Leo Takahashi Scholarship and contributes to the fund each year.

Cerminara said several years into his career he realized the impact that Penn State, and specifically Penn State Beaver, had on his life. He said he met his wife at Penn State Beaver, made some of his closest friends living in Harmony Hall, and was guided by his professors as he matured into adulthood and learned how to be a problem solver.

“I decided that I wanted to give back in some way,” Cerminara said. He said he jumped at the chance to be a part of the advisory board, which was the beginning of his volunteer efforts to help the students and the campus.

“Through my volunteer efforts, it further strengthened my fondness for the campus and those associated with it,” Cerminara said. “I am truly touched and honored to be named Outstanding Alumni of the Year. I am so grateful and forever dedicated toward helping the success of Penn State Beaver.”