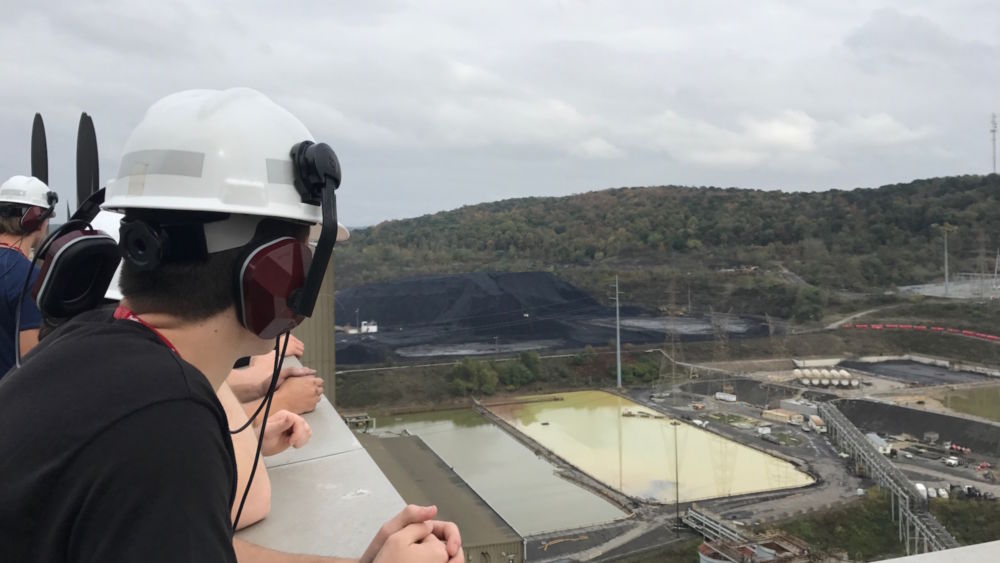 Penn State Beaver Assistant Teaching Professor Jim Hendrickson's engineering students got a tour of the nation's sixth-largest, coal-fired power plant from an alumnus of the campus.

It happens sometimes when the plant is shut down for maintenance and workers are loading equipment into the car. But it’s never happened when Ron Lonnett, manager of major projects, has been leading a tour.

“I’ll tell you what,” he says, apologetically. “We’re going to have to take the stairs.”

His tour group releases a collective groan. They’re on the roof of the Unit 1 boiler house, and the floors are made entirely of metal grates. So, if you look down at the right angle, you can see 17 stories down.

“Ah, the true experience,” he announces.

He’s brought his students to the plant for just this reason. The first two years of engineering are designed to be foundation-building and can feel more theoretical than functional. Hendrickson is in a constant fight to keep it real. He trains his students to use CNC routers and 3D printers to create working models of their designs. He invites working engineers into his classroom to talk about their careers. He insists on collaborating in teams to mimic the way professionals do it.

And now he’s invited his them to take a look at the inside the nation’s sixth-largest, coal-fired power plant. It’s loud. It’s dirty. And to thermodynamics students just learning about the physics of heat and temperature, it’s fascinating.

Lonnett, a Penn State graduate who studied electrical engineering technology at Beaver in the 1970s, is the expert, easily spouting facts and figures as he leads the students around the plant where he’s worked for 30-plus years.

Bruce Mansfield is FirstEnergy’s largest plant and one of the last remaining of its size in the country. It was the first built with scrubbers for sulfur dioxide, removing more than 90 percent of the toxic gas, and, with all three units running at full capacity, produces 2,490 megawatts of electricity.

It other words, it’s a beast.

“Everything about Mansfield is the largest, the deepest, the tallest,” Lonnett says.

At the time of the tour, all three units are shut down for repairs and upgrades, which offers students the chance to peer into the Unit 1 boiler, typically too hot and dangerous a prospect, and ask questions of workers who typically monitor systems on a bank of computer screens.

The plant only works when dozens of intricate systems fire properly, and walking Unit 1 from top to bottom offers a glimpse at just how impressive a feat that is.

"Amazing what it takes to turn on your lights, isn't it?" Hendrickson asks his students.

The nearly three-hour visit ends with an invitation from Lonnett to return, a testament to the professional network Hendrickson has built for his classes and something the students seem eager to do, despite their descent from the 17th floor.

“So, what did you think?” Hendrickson asks his students as they head back to the security building to turn in their temporary badges.

“Actually,” one of the students says, “I’m glad we didn’t take the elevator.”