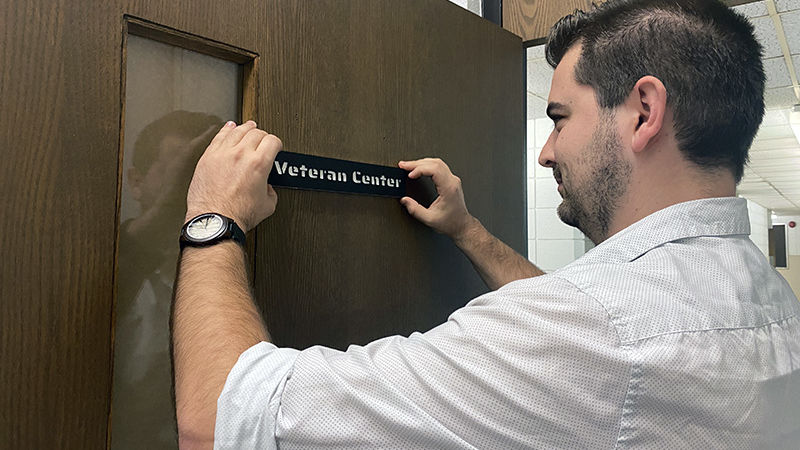 A group of student veterans is working to build a community on campus where veterans can find support and connect with others who have shared experiences in the military.

Student veterans on Penn State Beaver’s campus have a new spot they can go to meet with other veterans, get helpful information or just hang out for a bit.

Students Josh Graham, Michael Radatovich and George Grimm Jr. all served in the military and realized it is important for student veterans to connect because they have a unique shared experience.

The group worked with the campus to get a room in the basement of the library that is now a designed lounge area for veterans. Currently the room has a desk and chairs and a bean bag chair, but they are working on getting more furniture and a small pantry. There is also information in the lounge with resources specific to veterans.

Grimm, an Army veteran, crafted a sign and logos for all of the military branches using a CNC router.

Grimm, who is a communications major, said leaving the service was a time of transition with an uncertain path ahead.

Radatovich said when he got out of the Marines, he wasn’t sure what to do at first. He admits he spent his first six months mostly hanging out and drinking before he realized he had to find a new purpose. That led to him going back to school.

Entering college after time in the service also means student veterans are older and have come from a place where they had to perform at a high level, sometimes in combat, and that support group is gone, Radatovich said.

Graham, a Marine veteran and biology major, said entering college after the military is a big change, and there is a distinct realization that they don’t have the same type of peers. “No one else was like me, and that was weird,” he said.

“I remember feeling absolutely out of place,” Grimm said.

That’s what the trio are aiming to improve at Penn State Beaver. They are working to create a place on campus for veterans to find a new support group with people who can understand their shared experience.

In addition to building relationships with other veterans, the group is hoping to work with the university to expand the services offered to veterans on campus and to utilize the knowledge student veterans have.

Radatovich, who is a business accounting major, started at Community College of Beaver County before transferring to Penn State Beaver. At CCBC he was the president of a veterans group and had a VA work study position to help other veterans with their paperwork and to make sure they were getting all their benefits.

The group would also like to connect to other student veteran groups in the local higher education community to build an even larger community.