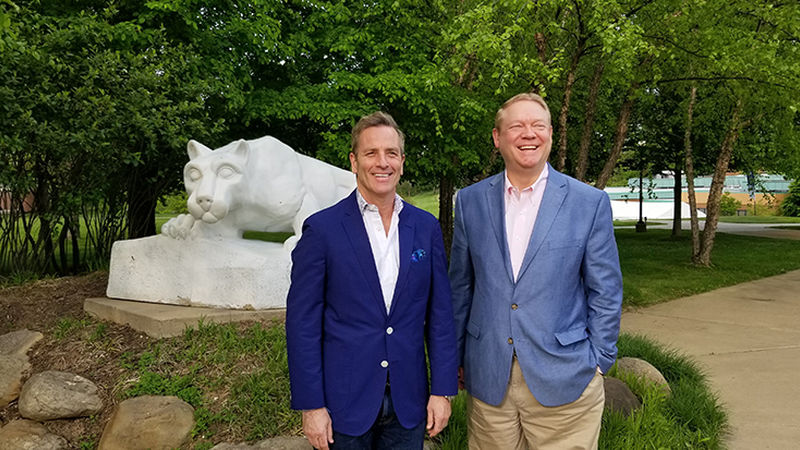 Shining light on Penn State Beaver and beyond

Scott Cunningham, a 1980 Penn State graduate of the Smeal College of Business, will never forget a story told to him decades ago.

As a boy doing farm chores in the dark, Bayard Kunkle’s father would say, “Bayard, hold the light so you can see and so I can see, too.” Years later, Kunkle graduated from Penn State and ultimately established a scholarship, helping to “shine the light” so that others could have the same experience he did.

In one year, 11 students were awarded scholarships equal to one semester of tuition thanks to Kunkle’s generosity. Cunningham was student government president at Penn State Beaver at the time and served on the scholarship selection committee alongside faculty and staff.

“I knew those 11 students. I lived in the dorm with many of them,” Cunningham said. “That one semester of scholarship made a difference in eleven lives.”

Today, Cunningham serves as Penn State Beaver’s Advisory Board president and leads the executive committee. He’s served on the board since 2012, and in his current role is responsible for facilitating the communication between all board committees, including campus master plan, academic advancement, student engagement, community engagement and fundraising.

“I am so appreciative of the life trajectory that was set for me coming out of Penn State Beaver,” Cunningham said. “It is impossible for me to go back and say thank you to all who extended such kindness. My way of recognizing them and saying thank you is by giving back to the place where it occurred.”

Much of the board’s fundraising efforts support endowed scholarships to benefit high school students from the Beaver County area. Each year, the board organizes an annual event to raise money for the endowment and later receives a report showing the names, high schools, and hometowns of the scholarship recipients. “We’re able to support young men and women with diverse academic majors from high schools and hometowns spread widely across western Pennsylvania,” Cunningham said.

As a longtime volunteer, Cunningham values the enduring relationships that he has fostered throughout his years of service — two of the most impactful relationships being with Jim Luce, who was Cunningham’s work-study advisor, and Darryl Polzot, whom he met on campus in 1977 and still considers his best friend today.

“I am truly fond of the people — faculty, staff, and fellow students — who nurtured, encouraged and simply befriended and looked out for me during my time as a student at the Beaver campus,” he said.

“I want and hope that my philanthropy will help make a difference,” Cunningham said. “At my stage of life, I reflect on my blessings and recognize and appreciate those who helped me get to this place. If I can give a little money that may fund the difference between a student attending or not attending, that’s what I want to do.”