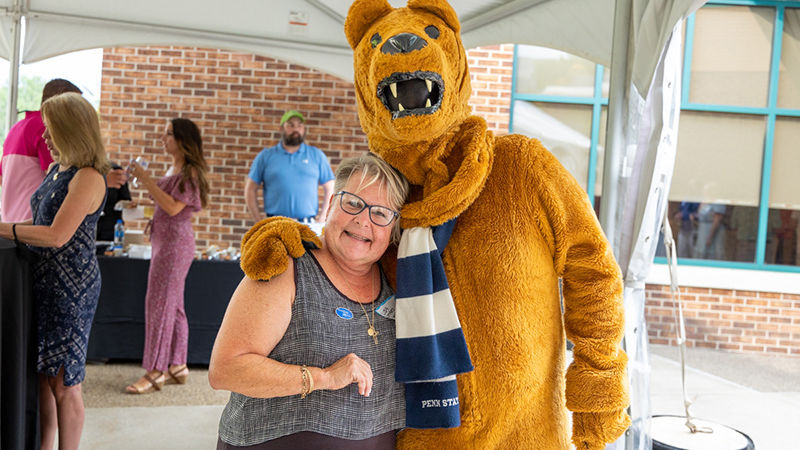 Lisa Majerchik, a 1978 graduate in nursing, is Penn State Beaver’s 2021 Outstanding Alumnus, an honor she said she was shocked to receive. “I never dreamt of a recognition. I didn’t even know they had an Outstanding Alumni Award, to be honest,” she said.
By: Kristen Doerschner

And that it is.

Majerchik, a 1978 graduate in nursing, is Penn State Beaver’s 2021 Outstanding Alumnus, an honor she said she was shocked to receive. “I never dreamt of a recognition. I didn’t even know they had an Outstanding Alumni Award, to be honest,” she said.

But Lisa speaks with such love about the campus, her late husband and caring for others that it’s easy to see why she was named the most recent recipient of the annual award.

Majerchik grew up in Beaver, the youngest of three siblings, all of whom went to Penn State Beaver. She began her university education in the fall of 1975, and she wasn’t on campus long before she met the man who would become her husband, Nick.
Nick was older than Lisa by five years. After high school he had gone to another college and then entered the Coast Guard, she explained, so they ended up at Penn State at the same time.

Lisa caught his eye, and he began asking other students, “What’s with this Lisa?” she remembered. They officially met in the Student Union Building. “That began the story of Nick and Lisa,” she said.

Nick, an engineering student, worked on his degree as Lisa earned her nursing degree. They both went to University Park after their time at the Beaver campus. Lisa graduated in 1978 after only three years, but Nick joked that he wouldn’t marry her until she paid off the Pinto she was driving. She took her boards and went to work at what was then Beaver Falls Hospital. Nick graduated the next year, and — Pinto paid off — they married in September of 1980.

Nick was hired by Pittsburgh Paint & Glass at their Harrisburg location, so the couple moved away from Beaver County. Lisa was ambitious. She started out as a heart monitor nurse, but she had her sights set on being a surgical nurse. She got the floor experience she needed and did just that. She spent a good portion of her career as a surgical nurse in Harrisburg.

Nick and Lisa built their life together, working as a team on all the house renovation projects Nick would dream up as they pursued their careers.

And so it went for many years until Nick passed away unexpectedly in 2011 at the age of 58.

“I miss him terribly,” Lisa said.

The couple were unable to have children, but they were committed to making a difference in the lives of young people. After Nick died, Lisa returned to Penn State Beaver to make a donation to the campus. She also is in the process of establishing a new endowment.

Giving back and helping others is important to Lisa. She quotes Taylor Swift to sum up what she believes: “No matter what happens in life, be good to people. Being good to people is a wonderful legacy to leave behind.”

She said she plans to continue to support the campus posthumously as well. “They’ll get more after I croak,” she said with a mirthful laugh. “But that’s in the Lord’s hands.”

“Beaver is just so near and dear to my heart,” Lisa said. “Beaver campus is home. It’s perfect … If I had not gone to Beaver, I would have never met Nick. And if I hadn’t met Nick, I would never have had the life I had.”