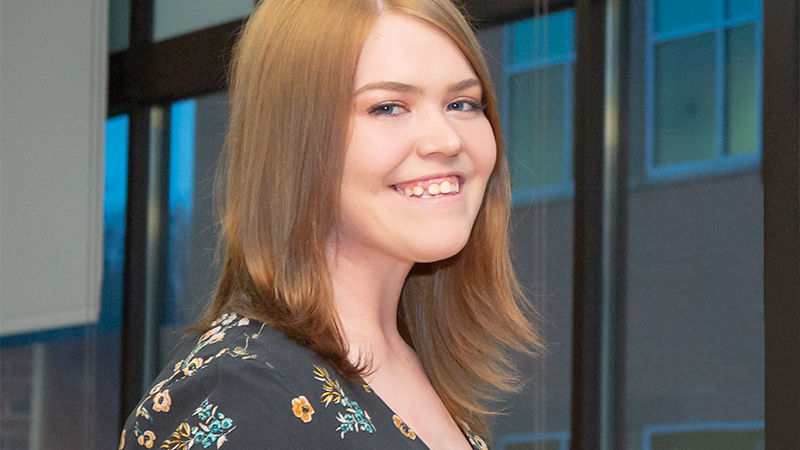 It’s only been three years since Katie Work graduated from Penn State Beaver, but she’s already established a fulfilling career that has given her multiple opportunities for advancement.

It’s only been three years since Katie Work graduated from Penn State Beaver, but she’s already established a fulfilling career that has given her multiple opportunities for advancement.

Work is a 2019 graduate with a degree in management and marketing. She had a job waiting for her with Amazon after a recruiter spotted her on LinkedIn during her senior year. Shortly after graduation she moved to Carlisle, PA to be an area manager where she oversaw about 100 associates. She said she was a “pick manager” who worked in the outbound packing and shipping of products.

After a year, Amazon gave Work the opportunity to return to the Pittsburgh to launch a new distribution building in Imperial. She was one of two managers to launch and oversee an outbound shipping dock team.

After a year in that role, she continued to expand her skills with several other job changes at Amazon, including working in a project management position with Amazon’s global engineering startup team. “We essentially would get assigned (warehouse) building launches,” Work said. “We worked with construction teams and oversaw the build from start to finish to bring operations teams in and get it up and running the way it should be.”

The job entailed traveling all over the United States. “It was a very good challenge, for sure … I definitely learned so much,” she said.

Now Work is back in an operations role in Imperial. “People always joke that if you start in operations, you find your way back to operations. It definitely happened for me,” she said. “I’m still an area manager, but now I have a little more responsibility. I really enjoy the team I’m with. They’ve opened me up to a lot of opportunity.”

In addition to her main role overseeing 70 associates in the vendor return department, Work also coordinates a volunteer community outreach program called Amazon Gives. Employees sign up for volunteer opportunities. “It’s really great to be able to give back to the community through work like that,” she said.

Work said her experience at Penn State Beaver prepared her for her career. “I like that (Penn State Beaver) had a diverse option for courses. It allowed me to be more fluid in what I do and gave me just enough experience to put it to work and get on the job experience,” she said. She added that the smaller class sizes were also a benefit.

“Our campus, in particular, was very great about developing females and female leaders,” Work said. “The professors, like Dan Smith (associate teaching professor of business), and others would go the extra step just to make sure you understood everything, that there are differences in the business world … and they set us up for that to be prepared for that.”

“Both my experience at Penn State and my current and previous positions really set me up to be a better person,” Work said. “I know that sounds very cliché, but it really has. Going through college, experiencing difference professors, studying abroad, playing on a men’s hockey team, coming into a workforce that is diverse … I want to learn more because of this. I have better emotional intelligence, communicate better, and feel like I make difference now.”