Cindy Chen, a spring 2022 graduate of the Smeal College of Business, started her university years at Penn State Beaver with the 2+2 plan, which allows students to complete the first two years at a Commonwealth Campus like Beaver and then transfer to another campus to complete their degree.

College is often what you make of it, and one recent Penn State grad certainly made the most of her time.

Chen, a spring 2022 graduate of the Smeal College of Business, started her university years at Penn State Beaver with the 2+2 plan, which allows students to complete the first two years at a Commonwealth Campus like Beaver and then transfer to another campus to complete their degree.

Chen moved to Penn State University Park to complete a five-year integrated Master of Accounting program. She graduated with both a bachelor of science in accounting and a master of accounting degree.

She will be heading to Los Angeles in a few weeks to begin a job with Price Waterhouse Coopers in their tax practice.

It was her start at the Beaver campus with the 2+2 program that set her on the path toward collegiate success.

“Beaver was not what I expected at all,” Chen said. “When I came to campus, I didn’t know anyone. I had just moved from California. … Students, faculty and staff were very welcoming and encouraging.”

Chen moved to the Beaver County area with her family. Her father, Dr. Baizhou Chen, was an assistant teaching professor of accounting at Penn State Beaver.

Chen credits the smaller campus and class sizes at Beaver as the reason she was able to get the most out of her time there.

“The professors there are able to help you one-on-one,” she said. “I was able to take a lot more classes because I was getting more help from the professors directly. And I was able to get from place to place quickly, so I could stack classes, but still go to the gym. At University Park my workout was walking around campus.” 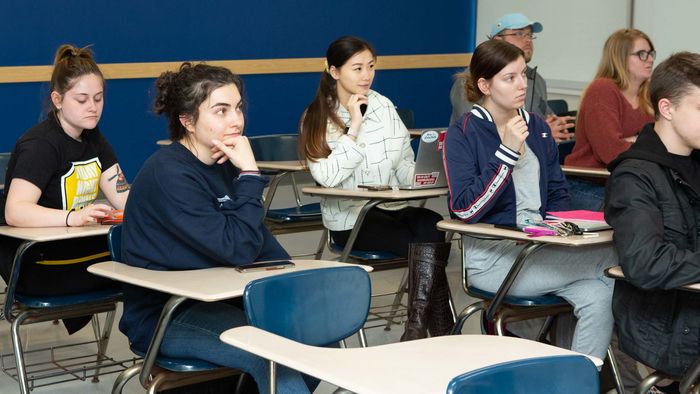 Cindy Chen, center, sits in class with other Lion Ambassadors in 2019.

In addition to her classes, Chen was involved in the Student Government Association’s executive board and Lion Ambassadors. She was also a THON chair, vice president of the Business Club, a tutor, and a student worker in the Center for Academic Achievement.

“That certainly was the right move. Cindy was one our most prepared, most confident and most capable Lion Ambassadors ever. In fact, we always gave her the biggest groups because, despite her small size, she had a big voice and could be easily heard from the back of the pack.”

Her on-campus experiences prepared Chen for the future.

“I did a lot there and still had time to balance my classes. It prepared me for University Park,” she said.

“She understood the value of the small campus with small class sizes, and not only took advantage of those benefits, but always told others what an advantage it was to start her college journey at Penn State Beaver,” Pinchot said.

Chen said getting involved on campus is a great way to meet new people, especially for someone going to a college where they don’t know anyone. Living at home and commuting to campus during her time at Penn State Beaver didn’t hold her back.

“Penn State Beaver does a great job in making sure they include commuters in all of the events, even the events in Harmony Hall in the evenings,” Chen said.

“Another part of it is that you have to make sure you are open to joining and trying new things, even if you are commuting,” Chen said. “There’s always something to be involved in as long as you want to be involved. You will never feel like you’re not included or you’re missing out.”

There are other benefits to commuting as well.

“Living at home saved so much money, and it’s nice to be able to sleep in your own bed for two years,” she said.

Preparing for a career

In the summer of 2020, Chen landed an internship with the Television Academy Foundation to get acclimated to the entertainment industry. She was unable to go to California because of the COVID-19 restrictions, but TAF created a distance internship to give their interns experience in production management and how it ties into business.

Chen said she was given a full curriculum of professional development, including creating resumes, cover letters and elevator speeches. She said she was also able to participate in Zoom panels with people in the entertainment industry, including producer Gina Prince-Bythewood. She also got to see an advanced preview of Netflix’s “The Babysitter’s Club” and then participate in a panel with the show’s executive producer and show runner.

During the summer of 2021 Chen interned with the accounting firm of Price Waterhouse Coopers, working with entertainment clients, an experience that led to her post-college job offer.

“I know in my heart of hearts that Cindy will accomplish great things in her future, and I just can’t wait to see what she accomplishes,” Pinchot said. “Whatever it is, I’m confident she won’t forget about her Penn State Beaver roots.”